Progressives are people who advocate for change, improvement or reform. By that definition, governments elected by people in western Canada, provincial and federal, are anything but progressive when it comes to energy matters. 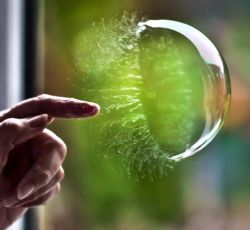 Canada, British Columbia, Alberta and Saskatchewan are today committed to pumping billions of dollars into the inevitable carbon bubble.

…the coalition of 70 investors has become convinced that fossil fuel companies might not even get to burn the reserves they already hold. Maybe not in five or 10 years, but perhaps in 20 or 30, the pure mathematics of the situation could eventually cause the sectors’ market value to plummet—at least if companies stay on the path that many are on today.

…reserves of untapped fossil fuel assets could be left “stranded” in the ground. Investment bank HSBC believes that some companies could lose 40% to 60% of their market value in this kind of situation…

Fossil-fuel companies won’t necessarily be doomed by climate change, however, the investors’ letter notes. The ones that plan their strategies well and make investments in emerging alternative energy sources, as some already have been, could be well positioned to emerge in an energy economy dominated by what are considered “alternative” sources of energy today.

Several major economies rely heavily on fossil fuel production and exports, yet current low-carbon technology diffusion, energy efficiency and climate policy may be substantially reducing global demand for fossil fuels. This trend is inconsistent with observed investment in new fossil fuel ventures, which could become stranded as a result…

According to the researchers, a global financial crisis could result.

The existence of a “carbon bubble” – assets in fossil fuels that are currently overvalued because, in the medium and long-term, the world will have to drastically reduce greenhouse gas emissions – has long been proposed by academics, activists and investors. …a sharp slump in the value of fossil fuels would cause this bubble to burst…

…detailed simulations found the demand drop would take place even if major nations undertake no new climate policies, or reverse some previous commitments.

That is because advances in technologies for energy efficiency and renewable power, and the accompanying drop in their price, have made low-carbon energy much more economically and technically attractive.

Dr Jean-François Mercure, the lead author, from Radboud and Cambridge universities, told the Guardian: “This is happening already – we have observed the data and made projections from there. With more policies from governments, this would happen faster. But without strong [climate] policies, it is already happening. To some degree at least you can’t stop it. But if people stop putting funds now in fossil fuels, they may at least limit their losses.”

Of course there is a different path for Canadians to follow. Instead of expanding tar sands production and investing billions in a pipeline with no strong business case, taxpayers could be financing clean renewables.

…things have changed with solar and that it’s the best option out there. That’s an important message to get out.

If you look at the figures from the last few years, growth has consistently stayed at around 40% a year. If it keeps growing at that rate, we’re looking at hitting a terawatt of solar production in 2024.

Even if it slows to growth of 20% a year, we are on track to reach production levels of a TW a year in the late 2020s. And that’s the area where you can really start cutting greenhouse gases.

There’s a growing consensus that we’re going to get most of our energy out of solar down the track.

David Suzuki, The Guardian, Oil may be Canada’s past, but we cannot let it be our future:

There’s a lot of fear and insecurity around moving away from an industry that’s been an important economic driver for decades. Change, after all, is hard.

Yet the rest of the world is proving that now is the time to transition – fairly and justly, including all citizens – into a clean and sustainable renewable energy economy.

Governments are sometimes said to be investors “of last resort”. That is, if a government is the only willing investor in a project or product, its private sector viability is lacking.

The Canadian government’s decision to buy and take over Kinder Morgan’s Trans Mountain pipeline project may go down in history as a massive misstep, not just because of the questionable business case, but also for the inherent environmental risks and lack of consideration for the rights and title of indigenous peoples during this so-called “age of reconciliation” in Canada.