The item below the line was published in June 2017, three weeks before John Horgan became Premier. Many had hope for a major change in the direction of BC Hydro. There has been none.

I see a parallel to the Vancouver experience. When developer-friendly Non-Partisan Association was pushed from control of City Hall, major policy changes were expected. Instead, Vision Vancouver were still friendly to real estate developers, just ones with different names on their doors.

In energy matters, BC Liberals served special interests. The Horgan Government continues that style, except that a few of the beneficiaries are different.

Partly this is explained by an energy Minister awed by senior officials and powerless to implement policies she once advocated. But mainly, it results from a group of politicians who do not feel obliged to fulfill major election promises or live up to principles of accountability.

BC Hydro suffers a lack of managerial competence, contempt for fiduciary responsibilities, a disregard for present day energy realities and, perhaps most important, a failure of vision.

The first exists because Government turned the company into a politicized utility, with senior managers and board members selected for Liberal Party loyalty, not for competence. As a result, BC Hydro dares not plot a new course with even a hint that recent energy policies have been a grand mistake.

As a dead French emperor once said:

Conservation is the cleanest, easiest and least expensive way to meet the increasing demand for electricity in B.C.

Because Gordon Campbell’s Government planned to buy power worth more than a billion dollars a year from independent producers, Elton was fired. Conservation was no way to put public money into the private hands of important Liberal friends and supporters.

Dave Cobb, a subsequent CEO at Hydro, was overheard speaking about government policy:

If it doesn’t change, it would be hundreds of millions of dollars per year that we would be spending of our ratepayers’ money with no value in return.

The way the self-sufficiency policy is defined now…would require us to buy far more long-term power than we need.

I think they’re going to make a major change there, which will significantly reduce the amount of power we will be buying from independent power producers and anybody else. Government has to make a change…

The decision to proceed with the Site C facility is not based on economic considerations; it is a political one, prioritized to deliver financial benefits to Liberal friends. Were there demonstrable needs for Site C power, those would have been shown to the BC Utilities Commission (BCUC), the quasi-judicial agency charged with ensuring British Columbians “get value from their utilities, with safe, reliable energy services.”

Pushing forward without effective oversight is but one indicator of a questionable project. Another is the considered decision to tell lies about the province’s need for electricity.

Premier Gordon Campbell said in 2011 that the primary reason for Site C was to meet future energy demand within British Columbia. He knew better because the province’s demand had been flat since 2005. But Campbell also understood the Napoleonic dictum quoted above. 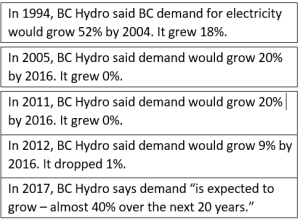 Writing in the Vancouver Observer in 2014, Warren Bell surmised that building Site C was:

…not purely about addressing future energy requirements for ordinary British Columbians, or managing the water resource. It’s to give a boost to the brand new fracking industry –  Christy Clark always softens the name to the “LNG” industry – which the Liberal government believes will form the basis of the provincial economy for the foreseeable future.

Even when the Liberal’s trillion-dollar LNG fantasy was proven an empty electioneering stunt, Liberals hurried to get Site C beyond a foggy point of no return, even if that meant contracting with an impecunious Alberta company and two foreign corporations elsewhere accused of fraudulent business practices. That latter quality particularly endeared Samsung C&T and Acciona to BC Liberals.

In  2017, the downward slope of clean alternative energy pricing is well established. Utility scale solar power is coming on stream at less than half the cost of Site C and wind power is also being produced at under 5¢ a KWh. Power about equivalent to Site C’s output is available for 2.6¢ a KWh by returning the Canadian Entitlement of Columbia River downstream benefits.

Because Liberals cannot argue that new electricity capacity is needed in the foreseeable future, they now argue, as Christy Clark did, that its purpose is to provide jobs and “opportunities for apprenticeships, skills training, and business contracts.”

Many small and medium-sized enterprises throughout the province could offer the same benefits for a fraction of the cost of the province’s most expensive project of all time. And, encouraging SMEs wouldn’t result in destruction of First Nation cultural sites or flooding of Class 1 farmlands.

Clearly, Site C is a massive waste of public dollars and BC Liberals simply don’t care. Nor does the Board of Directors of BC Hydro. It should be replaced post-haste.

Strengthen cost management capabilities and foster a culture of cost-consciousness at all levels of public sector organizations. Provide public services and programs as efficiently and effectively as possible to “bend the cost curve” and support sustainable public policies and programs as a lasting legacy for generations to come.

Transparently manage responsibilities according to a set of common public sector principles in the best interest of the citizens of the province. By enhancing organizational efficiency and effectiveness in the planning, reporting and decision making, public sector organizations will ensure actions are aligned with government’s strategic mandate.

Comply with a rigorous, standardized approach to performance management and employee compensation, which reflects appropriate compensation for work across the public sector that is consistent with government’s taxpayer accountability principles and respectful of the taxpayer.

Engage in equitable, compassionate, respectful and effective communications that ensure all parties are properly informed or consulted on actions, decisions and public communications in a timely manner. Proactively collaborate in a spirit of partnership that respects the use of taxpayers’ monies.

Make decisions and take actions that are transparent, ethical and free from conflict of interest. Require the establishment of a strong ethical code of conduct for all employees and executives. Serve the citizens of British Columbia by respecting the shared public trust and acting in accordance with the taxpayer accountability principles.

Tagged as: BC Utilities Commission BCUC