Punishment does not fit the crime 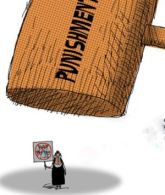 Let’s compare treatment of Ms. Embree and others to that involving offences by a corporation.

Kinder Morgan’s Trans Mountain subsidiary installed mats in streams to prevent fish from spawning in a river where the pipeline is to be built. Canada’s pipeline regulator, the National Energy Board, gave them a “stern warning” and told them to stop.

BC’s Oil and Gas Commission was even tougher. They penalized Kinder Morgan Canada Ltd. $230 for the act, which is less than the penalty for plugging your phone into a car charger while you stop at a red light. BCOGC fined Kinder Morgan a further $690 on three counts related to fresh water withdrawals.

Kinder Morgan revenue in fiscal year 2017 was $684 million. So the $230 fine assessed the company was equivalent to a 1¢ fine to a citizen earning the median income of Canadians.

Of course, we all remember the Mount Polley tailings dam disaster that released more than 25 million cubic metres of poisonous tailings and water into Quesnel Lake and outflowing rivers. The event has been called one of the largest environmental disasters in Canadian history.

What was stern treatment of billionaire Murray Edwards’ company Imperial Metals? Remember, the controlling shareholder of Mount Polley  was also a BC Liberal bagman of epic proportions.

Three years after the tailings dam breach, BC Conservation service announced it would lay no charges against Imperial Metals.

Bev Sellars, acting chief of the Xat’sull First Nation, laid a private information on the last day permitted by provincial law. Months later, BC Attorney General David Eby’s officials dismissed the charge before it could go to court.

Federal charges against Imperial Metals remain possible but, given that we’re now in the fifth year since the disaster, they would be quickly thrown out under the Supreme Court of Canada rule that trials must occur within a reasonable time. The high court had expressed concern about “culture of delay and complacency” in bringing cases to trial

In the end, one of Canada’s worst environmental disaster will be associated with zero penalties imposed by courts.

Ok, we’re not surprised that corporations can buy immunity with substantial contributions to political parties. What about white-collar crime in BC?

David Michaels, a fraud artist targeting seniors, was accused of convincing hundreds of clients (average age 72) to purchase $65 million in securities, most of them worthless. The BC Security Commission ordered Michaels to pay $23 million. He paid nothing and served not a day in jail.

Income taxation is another place where unequal treatment is rife.

In 2015, we learned that wealthy tax dodgers were using a scheme designed by KPMG to avoid paying Canadian tax. A year later, it came to light that Canada Revenue Agency negotiated a secret deal with KPMG providing their clients secret amnesties with no penalties and reduced interest.

At the same time, CRA auditors were chasing and penalizing $10-an-hour restaurant workers who failed to declare the level of tips that tax assessors estimated to be appropriate.

A few years ago, I wrote Would 7¢ fines deter improper acts by citizens? It included this:

A millionaire businessman in Finland has been fined €54,000 ($73,000 CAN) for speeding. While the businessman’s fine may seem extortionate, it is part of a tradition of “progressive punishment” that stretches back over nine decades.

In Finland, speeding fines are linked to an offender’s income.

This is not even the highest ever financial penalty received for speeding in the country. Back in 2002, a Nokia executive received a €116,000 ($158,000 CAN) fine for speeding on his Harley Davidson motorcycle.

Since 1921, some offences that require a non-custodial sentence in Finland have been punishable by “day-fines”. These are calculated on the basis an offender’s daily disposable income…

When Justice Kenneth Affleck jailed a senior who was honestly motivated to improve the world, the judge was following a long-established Canadian legal tradition. It dictates:

The purpose of punishment is deterrence, incapacitation, rehabilitation, retribution, and restitution, except when the perpetrator is a white-collar criminal or a senior officer of a wealthy corporation. In those cases, there is no need for punishment to fit the crime.