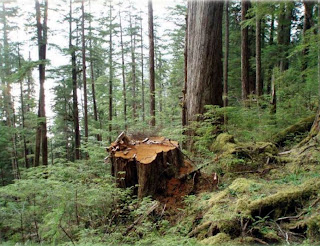 Deregulation, beloved incantation of economic libertarianism, is a concept that values individual rights before individual responsibility.

The deregulation mantra is also popular among those aiming to exploit public resources with minimum constraints. We saw the effect in unregulated logging practices in British Columbia’s early days. Forest high-grading was routine. Only profitable logs were removed from the forest, others were left as fuel for slash fires that routinely clouded autumn skies.

High-grading was largely eliminated when science began to rule forest practices. Small diameter logs and lower value species were harvested alongside the most desirable trees and little fiber was wasted. However, operators longed for the more profitable days when companies set their own practices.

Business friendly BC Liberal politicians were easy targets for industry lobbyists. So too were naive environmentalists grown willing to trade passions of former youth for generous consulting fees. Forestry regulations were reworked and made innocuous. Science was marginalized. Expensive political efforts cost much less than good forestry practices would have cost.

High grading of the forests returned, under the guise of selective harvesting facilitated through heli-logging. Contractors hunt for prime value cedar, spruce and fir and transport large logs individually by helicopter. Production costs are high but a single premium specimen is worth tens of thousands of dollars. The harvest is so selective that the forest looks untouched but there is no requirement on the companies to replant. So low grade timber such as hemlock fills in and the future value of the forest is greatly reduced.

Of course, deregulation allows greater harvesting profits today but the expense will be borne by future generations. In 2008, a Special Investigation of BC’s Forest Practices Board produced a warning of the effect of high-grading on future forest quality. Industry was unhappy with the clear positions taken by the FPB and had government officials recalled the report for revision. However, while terminology in the new edition is considerably softened, the central conclusion remains unchanged.

This is but one example of how influence peddlers have gained authority over scientists in government decision making. Political choices are based on objectives of commercial interests. Government sees itself not as the custodian and caretaker of community assets but as a mediator whose role is to sell industry’s programs to the public.

In British Columbia, the Campbell government has had a decade to remove oversight and regulation capabilities. The Harper government has moved in the same direction although its actions have been moderated, thankfully, by its minority position in Parliament. However, Harper has begun new initiatives reminiscent of the BC Liberal 2001 effort tasked with “reducing the heavy hand of regulation.”

Harper’s program is not an honest effort to improve efficiency. They don’t even speak about deregulation, preferring use of the phrase “red tape reduction.” SFU Communications Professor Donald Gutstein has written about how only “supportive stakeholders” are welcomed to the Conservative process while people representing public and consumer interests are excluded.

While Harper was busy setting up the Red Tape Reduction Commission, negotiations for the border agreement were kept secret from Canadians, except for those Canadians who were “supportive stakeholders,” like the Canadian Council of Chief Executives, Canadian Chamber of Commerce and Canadian Trucking Alliance. These Canadians were kept in the loop and all three organizations issued positive statements when the deal was finally made public.