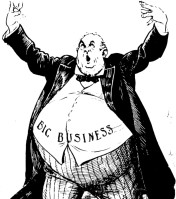 Numerous times in past decades, politicians studied media ownership in Canada. Despite expressions of concern, concentration has increased and, with Conservatives determined to end CBC’s meaningful role, the situation will be worse.

In Britain, the Leveson Inquiry began a year ago to examine the culture, practices and ethics of the British press. It is continuing to expose the real nature of the country’s political class. The Guardian’s John Harris says that is revealed as:

“a cloistered, incestuous bunch, whose obligations to courtiers too often outweigh the supposed demands of democracy.”

“This created an apparent reciprocity of interests. News Corp had its own ambitions and regulatory needs that politicians and public officials were in a position to assist or satisfy. The reciprocity could be implicit or explicit; spoken or unspoken. But it undeniably existed and was well-understood on both sides…

“It is dangerous in any sector to allow a single player to become dominant. It is doubly dangerous with the media sector because of the combination of factors described above. The press, rightly, argues that it exists to be a check on power. But when society’s watchdog shies away from holding itself to account it thereby creates a very potent form of unaccountable power.

Much of the above, particularly the last paragraph, applies equally well in Canada. Unfortunately, the considered objective of Stephen Harper’s Conservative Party is to impoverish the land and the people of this nation.