An item first published in March 2012 that I was reminded of today while scanning the morning news:

Alex Tsakumis reported that Christy Clark and her backers orchestrated a virtual coup d’état, seizing control of the BC Liberal Party, sabotaging the leadership contest with phantom voters. Tsakumis also questioned her truthfulness about the relationship with would-be political assassin Jaspal Singh Atwal¹ and Tsakumis reported that she was “a person of interest” — thought to be leaking confidential information to friends — in the RCMP’s investigation of the BC Rail sale, until police management shut down examination of senior BC Liberals.

Premier Photo-Op long ago went beyond stretching the truth and exaggerating. She grew accustomed to wilful and conscious lying and now relies on a continuous stream of falsehoods to promote herself and the government she leads. The corporate media assists by ignoring fabrications, even when they are readily apparent. Today, another example: 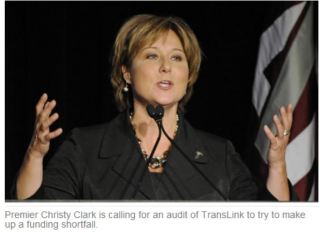 Premier Christy Clark is calling for an audit to TransLink to make up the funding gap needed to build the Evergreen Line.

Clark, in Port Moody to support Liberal candidate Dennis Marsden in his bid for the upcoming April byelection, said Thursday that TransLink — a billion-dollar organization — will need to tighten its belt if it wants the long-awaited SkyTrain line built.

“There’s still a funding gap for the Evergreen Line — $30 million — and we’re going to find that through an audit to TransLink,” Clark said to a partisan round of applause. “TransLink is a billion-dollar organization. We’re not going to find it through a vehicle levy, or other sources,” she said. “There are savings to be found…”

First elected to public office more than 15 years ago, Clark knows full well that public organizations such as TransLink are required by statute to hire qualified independent auditors and that provincial law requires publication each year of the auditor’s report and audited financial statements.

Translink’s auditor is KPMG, one of the largest professional services networks. With almost 150,000 staff, this is one of the world’s Big Four auditors.

¹ Bob Mackin wrote about the relationship with Atwal in his April 2012 report: What’s the Premier’s office hiding about Atwal?