BC Hydro’s own statistics prove the utility has no good business reasons to be building Site C. Domestic customers use the same volumes of electricity today as a dozen years ago and rapidly rising prices will ensure conservation continues to moderate consumer demand.

A decade ago, under old management, BC Hydro recognized that conservation was preferable to adding capacity. A conservation potential review identified almost 20,000 GWh/yr of energy savings that would be economically viable by the year 2020. That is four to five times the power that Site C might produce.

BC Liberals argue the new dam should be built, not because it is needed, but because it is providing jobs. That, of course, fails to account for financial damage to commercial and industrial enterprises hit with rapidly rising electricity rates. The competitive advantage of low cost electricity once enjoyed by BC employers has been squandered. 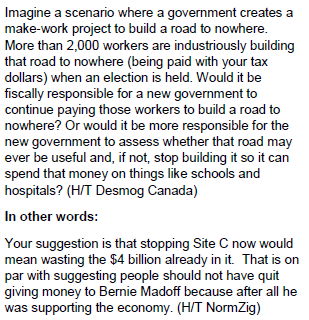 Prospective customers outside the province can buy or produce power at prices lower than Site C. In Alberta, energy consultant Larry Charach said there is currently a surplus of available power in Alberta, made worse by weak demand. B.C. energy ministry spokesman David Haslam admitted in 2015 that power has been available from the U.S. Pacific Northwest for 2¢ to 3¢ per KWh, which is about a quarter of the cost of Site C power.

British Columbia can require return of 4,300 GWh from the USA, its entitlement under the Columbia River Treaty. If it does not, the power will be sold to American utilities at a few pennies per KWh. The difference between U.S. market value and and the cost of Site C electricity could mean a loss of about $300 million a year.

In addition, the price of alternative clean energy is falling. Bloomberg reported in 2016 that an Asian joint venture bid 2.42¢ per KWh to supply solar power to a utility in Abu Dhabi. Of course, BC won’t match that price but Bloomberg notes the cost of solar installations “have fallen almost 70 percent in the past five years.”

A British Columbia solar company told me this week, “We’ve seen module costs fall 50% in the last year or so, 25% in the last 3 months, with an expected drop of another 30% in the next year.”

In Tamil Nadu, India is now home to the world’s largest solar plant and it was constructed for less than one-fifth the per megawatt cost of Site C.

Cleantechnica reported another clean technology that is supplying power at about one-fifth of Site C’s expected cost:

“Wind prices are at an all time low, with newly built wind projects in the US averaging around 2¢/kWh  thanks to technology advancements and cost reductions across the wind industry…

When obvious reasons for constructing very costly new hydroelectric capacity do not exist, we have to look at the less obvious. Commercial fraud is the worst explanation. A more innocuous one might be revealed by what author Frank Herbert wrote:

“There is little that bureaucrats hate more than innovation, especially innovation that produces better results than the old routines. Improvements always make those at the top of the heap look inept. Who enjoys appearing inept?”

It is a human inclination to hope things will work out, despite evidence or doubt to the contrary. A successful manager must resist this temptation. This is particularly hard if one has invested much time and energy on a project and thus has come to feel possessive about it.

Although it is not easy to admit what a person once thought correct now appears to be wrong, one must discipline himself to face the facts objectively and make the necessary changes — regardless of the consequences to himself. The man in charge must personally set the example in this respect. He must be able, in effect, to “kill his own child” if necessary and must require his subordinates to do likewise.

B.C. Hydro’s grid has an excellent reliability record, comparable with peer-group utilities. By using hydro dams and their reservoirs as “battery” storage to complement intermittent wind and solar, grid stability and reliability would be unaffected, as has been proven in many countries with such mixed-source supply.

If sold in USA, Cdn entitlement under Columbia River Treaty will gain about$130m a year. Same 4,300 GWh from #SiteC will cost $430m. #bcpoli