Maclean’s produced a ranking of the most dangerous places in Canada by examining communities with populations as small as 10,000. They explain the methodology:

The report ranks communities according to the Crime Severity Index, which is a Statistics Canada measure of all police-reported crime collected through the Uniform Crime Reporting Survey that takes into consideration both the volume and the seriousness of the crime. The index uses 2006 as its benchmark. The 2016 data is the most current available and was released July 24, 2017. Maclean’s collects the annual crime data for police services categorized as municipal by StatsCan and having populations of at least 10,000 people. Some police forces may cover larger areas then their name suggests, and populations for each police force were provided on request by StatsCan. Locations without a crime severity index were not included. Nor were communities with no provided population numbers included.

The data suggests serious problems in western Canada, with British Columbia worst by a wide margin. 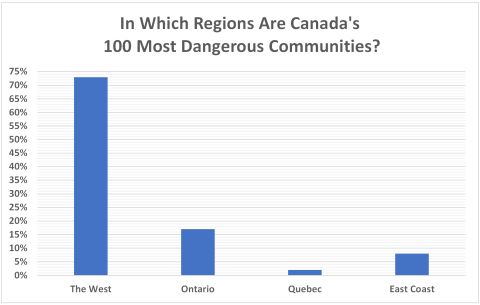 Questions are raised about the reasons behind these results and a lengthy examination by sociologists probably would not produce a clear and certain explanation. But, we can ponder possibilities:

British Columbia is more reliant than any other province on the RCMP for local policing. Communities might be better served by provincial and municipal police forces where staffing continuity and commuity attachment would be superior.

For years, western provinces have been in the grip of conservative politicians leading governments that limited expenditures for social services and, particularly in British Columbia, spending on general education and special education services.

Post secondary schooling became too expensive for many to pursue.

Entry level wages lagged behind the rising cost of living. Employment protections were substantially reduced and vulnerable workers were most affected.

Gambling facilities expanded rapidly and widely, allowing organized crime to enjoy money laundering facilities untroubled by law enforcement. Illegal behaviour was encouraged because it was profitable for the BC Liberal Government, its contributors and friends.

Court services and legal aid have been drastically underfunded in BC. Ian Mulgrew reported, “The B.C. Liberal Party’s stewardship of the provincial justice system for nearly 16 years has left it teetering on the brink of crisis, says the Canadian Bar Association, B.C. Branch.”

Social spending in this province was reduced to enable reduction of taxes and revenues from natural resources. It is worthwhile considering a statement issued in 1852 by a committee appointed by the governor of Vermont. It included the following:

Taxation is the price which we pay for civilization, for our social, civil and political institutions, for the security of life and property …