A free press is the watchdog of the people. The media holds the sacred responsibility of alerting the citizenry of actions by governments, elected politicians, corporations and even private citizens. It is the fourth estate…

But now the fourth estate is in crisis. The news media has been reshaped, redefined, and side tracked by commercial interests, biased ownership, the phenomenon of social media, the Internet, and a failure to police itself.

Most voters are ignorant or misinformed because the costs to them of acquiring political information greatly exceed the potential benefits. They can afford to indulge silly, false, delusional beliefs — precisely because such beliefs cost them nothing.

Those statements go together.

Because many traditional news sources have been sidetracked by political, commercial and personal interests, acquiring accurate information is now more time-consuming. People with other priorities are vulnerable to lies of commission and lies of omission.

Postmedia’s obfuscating political reporters are experienced practitioners of new style journalism. One example was noted by RossK at The Gazetteer.

Yesterday, Rob Shaw again offered only part of the story. His piece focused on BC Hydro’s announcement that it would sign no new private power contracts while government conducted an operational review of the utility. Shaw reported yesterday’s message was accompanied by news BC Hydro was approving five new IPP contracts.

Reading the Standing Offer Program website, we note the private power acquisition program is merely on hold. Without demand growth, with power available for import at one-third the average amount paid IPPs and with Site C coming on stream in a few years, why is a team still employed to administer new offers of private power?

Importantly, as Curious George noted on Twitter, the whole story of IPPs was not told:

Notice how Shaw reports NOTHING negative about IPPs. Zero facts on how disastrously costly they have been. Why do you think that is? 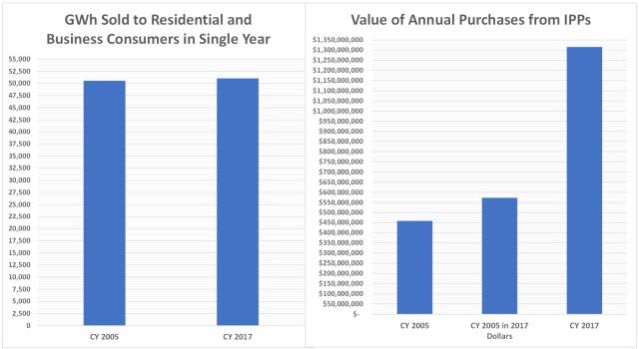 The steady increase of IPP purchases should trouble everyone, particularly after BC Hydro spent billions upgrading equipment and increased its own generating capacity by 16% since 2005.

Because of private power, with flat demand from BC consumers and soft trade markets, the utility reduced output from its own facilities. This assertion is evidenced by a chart showing the number of gigawatt-hours of electricity produced from each megawatt of BC Hydro capacity.

Production and capacity statistics are taken from the utility’s annual reports. I selected five-year periods for comparison to minimize the effect of unusual water flows in a single year.

Rob Shaw and Postmedia newspapers have never reported this sort of information. Doing so would cast a light on BC Hydro that does not suit political objectives of the newspaper chain, which is controlled by a New York hedge fund.

Vaughn Palmer used his own Postmedia column to absolve BC Liberals of blame for BC Hydro’s IPP mess:

In fairness to the B.C. Liberals, First Nation partnerships were a substantial part of many of the projects undertaken on their watch. But the lingering controversy involves long-term contracts that were locked in at higher prices before a decade-long glut of cheap electricity.

First Nations involvement is fact in a small percentage of IPP projects but the extent of participation is unknown. Some IPP arrangements with indigenous people appear to be more symbolic than substantive, put in place because First Nations engagement encourages public support for projects likely to be unpopular.

IPP deals have always been secret and beneficial owners are not revealed. In addition, ownership of many projects has shifted as early promoters cashed out and large corporations consolidated private power operations.

Palmer says the lingering controversy arises from contracts locked in before a glut of cheap electricity. He leaves the impression that problems with IPP deals were unforeseeable and unavoidable. 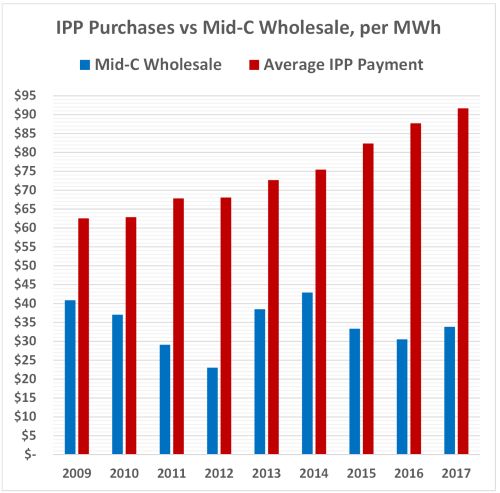 Throughout the period charted, BC Hydro was adding IPP suppliers and the average price paid was rising. It was over $100 per MWh in the final quarter of CY 2017.

Palmer is wrong to suggest there was no possibility of change in BC Hydro private power acquisition policy. This was either faulty analysis or a deliberate attempt to protect BC Liberals from criticism of their disastrous management of a once profitable crown corporation.

Either way, the Postmedia writer failed to serve readers responsibly. Doing so limits public pressure that BC Hydro and the Horgan Government deserve to feel. Regular readers of this site will be aware but, through failures of corporate media, ordinary citizens are intentionally misinformed about a vital topic.