Check out the fine work on electoral reform by Merv Adey 2018 fellowship recipient Andrew Seal. It’s a fabulous five part series published by The Tyee. We’d like to raise additional funds to initiate the next fellowship. You can be sure it will support a comprehensive examination of a subject important to all British Columbians.

Thanks to the responses of Merv Adey’s friends and admirers, we will soon be announcing a fellowship to be awarded a recent graduate of a recognized journalism program.

The 2018 fellowship will include cash sufficient for weeks of research and writing time, with a workspace provided along with mentoring and editorial assistance by respected professional journalists. Publication will follow in an important online news magazine.

We will be proposing a public interest subject that is important and timely for BC citizens.

If you want to add to the funds enabling this journalism project, use the information below.

You may contribute to the KEEP A LIGHT ON – MERV ADEY MEMORIAL by depositing to an account established at VanCity Credit Union. There will be zero administration costs and every dollar of donated funds will be used for the stated purpose.

Our intention is to provide bursaries to a post-secondary student or students of journalism who have an interest in political reporting and subscribe to a code of journalistic ethics like THIS.

The ADEY family will be involved in distribution of funds. Our objective is to encourage public-spirited journalism in line with the principles that Merv valued.

Your contribution can be made without cost at any branch of Vancouver City Savings Credit Union or by electronic transfer to: 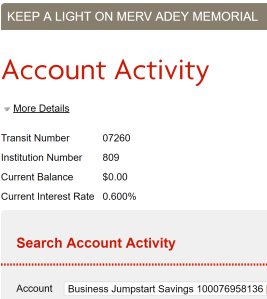 In addition to a cash award, experienced journalists and editors have agreed to provide mentoring to the journalism student awarded with a MERV ADEY prize.

Thanks to them. More details coming soon.

Both Premier John Horgan and Green Party leader Andrew Weaver offer to assist in creating a MERV ADEY journalism award that will encourage effective political reporting.  ROSSK, a UBC professor, will audit all transactions to ensure that every dollar contributed goes to an appropriate award. The Adey family will also participate to be certain that all money contributed serves journalism purposes that mattered to Merv.

In addition, experienced editors like Charlie Smith (Georgia Straight) and Paul Willcocks (The Tyee) offer to provide mentoring to journalism students who receive an award that honors Merv as an effective citizen journalist.

I knew Merv had been seriously ill for some time. Four weeks ago, he was hoping that a series of new cancer treatments would be successful and we planned to meet this month at his “humble digs.”

I was in touch with Merv when he announced what he hoped would be a temporary retirement from blogging. My words:

I (and many others I’m sure) will miss your intelligent contributions in this transitional period but you hung in there during the important times and helped set the province on a new political course. Be proud of that and focus entirely on getting well…

Merv didn’t seek sympathy and was always self-effacing, even as the clock ticked down. I began communicating with him in 2011. We shared concern that ethical conduct of government had disappeared in British Columbia but that only citizens paying close attention were aware.

His first message to me said:

He provided regular comments and encouraged me, especially if my site went quiet for a period. Over coffee, I urged Merv to create his own pages. His analytical and articulation skills were matched with an altruistic spirit and BCVeritas.com was – as the name implies – a truth-seeking effort.

“The truth is rarely pure and never simple.”

Today’s message by Premier Horgan informed me the end had arrived:

Saddened to hear of the passing of @MervAdey, who was so active in #bcpoli. My condolences to his friends and family, he will be missed.

Merv didn’t have much desire for personal recognition but would have appreciated John Horgan’s words. He hoped – no, expected – that many of the issues he thought important would be addressed by the Premier’s new Government.

I’m hopeful that writers and readers in the online world of BC politics will find a suitable way to remember and celebrate Merv Adey. He took a serious interest in improving political reporting and perhaps a bursary or award in Merv’s name to a worthy student of journalism would be appropriate. Let me know if you agree.