HST, BC Liberal’s generous gift to the corporatocracy, is having much less benefit for British Columbia’s economy than pretended by governing politicians. Why? Because, like all mega-corps, the largest companies in BC, ones like Teck Resources and Goldcorp, have international affiliates through which they can shuffle funds to offshore havens.

HST relieved companies of paying provincial sales or consumption taxes. The saving is about $2 billion a year. That and more comes from the pockets of individuals paying HST. One might assume that a surge in profits from sales tax reductions would result in large BC businesses paying more income tax. Not so. 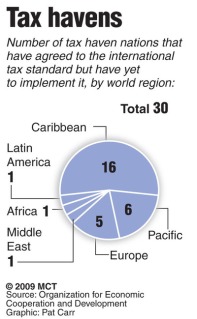 With operations scattered around the world, corporations are adept at having profits recorded where best sheltered from income tax. Suppose a BC mining company sells metals internationally. By foreign based trading subsidiaries, profits can easily be recorded elsewhere than in British Columbia. From the producer to the consumer, products can pass, on paper, through many jurisdictions with profits retained by trading affiliates in tax havens.

HST resulted in extra cost to consumers of $2 billion a year. A like amount, according to the BC Liberal Finance Minister, accrues to business and a significant portion of that sum is exported by companies that choose to reinvest or park the money overseas. A portion of the $2 billion that consumers who have spent in BC had they not paid HST sits in places like Hong Kong, Aruba, Switzerland or the other alternatives.