My graphic illustrations of the decline in BC’s natural gas revenues – despite 2013 election promises of up to $100 billion in revenues related to LNG – should be read in conjunction with the article by Marc Lee, senior economist with the Canadian Centre for Policy Alternatives. 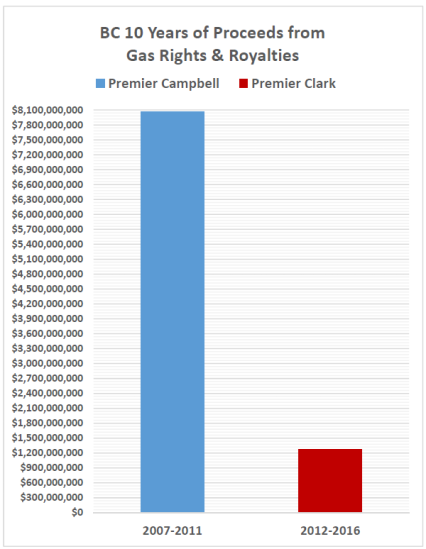 Mr. Lee’s work is excellent but he missed the $1.932 billion owed to gas producers as credits that can be deducted from future royalty payments. Missing the unrecorded liability is exactly what BC Liberals and their media pals want you to do.

The Province argues that the liability for credits need not be recorded because there is no certainty they will be used. But, really. In the last three years alone, $1.785 billion in credits have been used. There is near certainty the $1.932 billion owing will be used to reduce royalties in future years.

One trusted accounting text says this about recording or not recording liabilities:

It is worth noting that the liabilities for producers’ credits were completely hidden until FY 2012 when then Auditor General Doyle insisted that $702 million (adjusted later to $774 million) be mentioned in footnotes.

I argue the ten year record shows these credits to producers are more than “reasonably possible contingent liabilities.”