There is an interesting note in BC Hydro’s quarterly report issued in mid October for the period ended June 30, 2017:

These interim financial statements were approved on behalf of the Board of Directors on August 24, 2017.

By law (Budget Transparency and Accountability Act, Section 10(3)), BC Hydro was required to make public its most recent quarterly financials on or before September 15.

As a result, Section 17 of the same act imposed a duty on Michelle Mungall, Minister of Energy, Mines and Petroleum Resources:

The Minister gave no such statement and her ministry made no response to my request for the required document.

BC Hydro stated that its quarterly financial statements were approved by the Board on August 24. Yet, despite the statute, these were withheld until October 16, the first business day following the end of public hearings before the BC Utilities Commission’s Site C examination.

There seems to be only one reason for BC Hydro’s action. I presume it is explained by fears that a fully informed citizenry would more effectively dispute the need for Site C.

The quarterly report revealed that, despite BC Hydro’s statements to the contrary, demand for electricity is not growing and remains the same as it was in the same period of 2004. The crown corporation has been dishonest about this fact in its public announcements yet the financial records show my statements about demand are true. 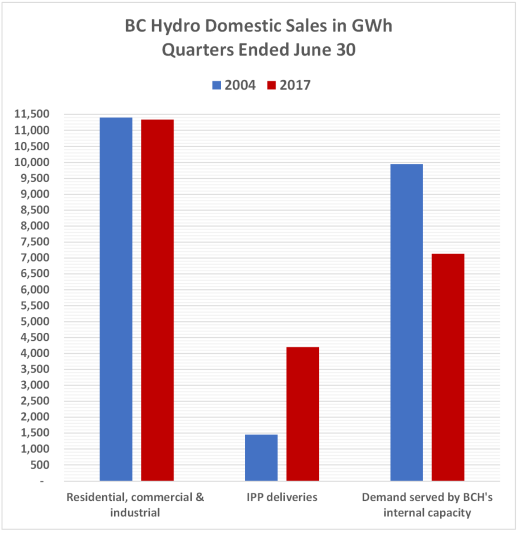 The amount of energy needed from BC Hydro’s own facilities to serve the needs of British Columbia has declined over the last ten years. This is the result of the Liberal Government forcing private power purchases. 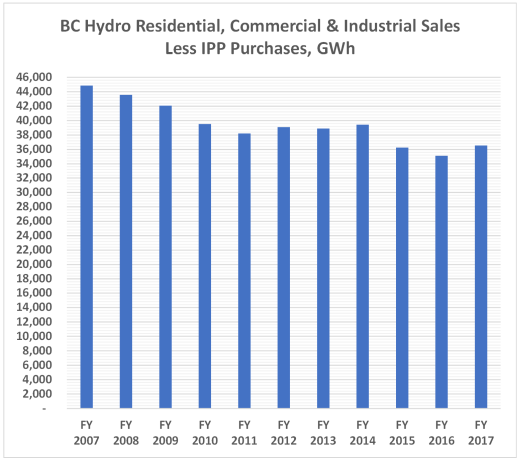 Even though the requirment for internally generated capacity has sagged, BC Hydro has been adding capacity to its own system. (Capacity is the maximum output a generator can produce at one moment in time. The amount of electricity a hydro generator produces over a year is determined by water flows, mechanical availability and decisions or the operator.) 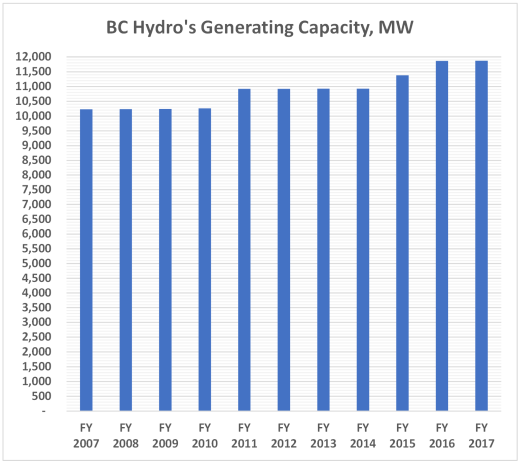 I’ve disputed BC Hydro’s policy toward private power. The utility met most demand from its own generators in 2004 while it bought 1,452 GWh from Independent Power Producers (IPPs). (Burrard Thermal, now closed, provided an average of 38 GWh monthly in that fiscal year.)

In the quarter ended June 30, 2017, BC Hydro bought 4,203 GWh from IPPs and sold less electricity to its domestic customers than in the same quarter in 2004. That meant a significantly less volume of electricity was required from the crown corporation’s generators, even though an additional 16% had been added to capacity between 2004 and 2017.

The utility loses money on every watt of private power it buys and resells. That is the single largest financial difficulty faced by the company. In the future, it is obliged to buy about $60 billion of electricity from IPPs at prices that will increase with inflation.

There are a few regional justifications but there is no pressing need for most of the IPP production. But, the obligation for its purchase cripples BC Hydro since surplus power cannot be profitably resold.

By the way, the following chart reflects average revenues received by BC Hydro over time. The impact of private power on the cost of electricity is apparent. Years of stable pricing ending in 2007. 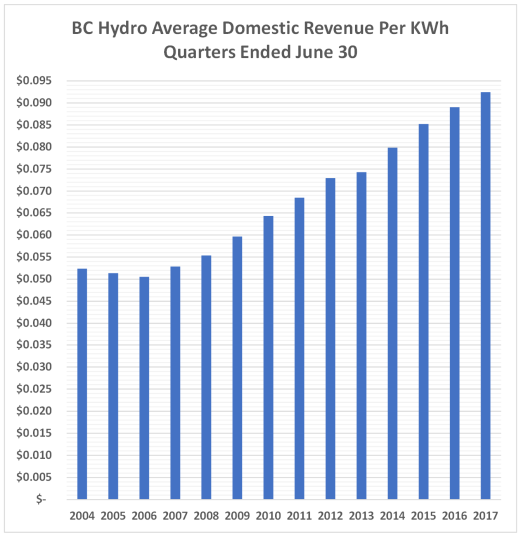 Generation of electricity: the next significant industry for BC’s interior relies on the same natural resource as viniculture: sunlight. #bcpoli #SiteC