In recent days, even unobservant citizens came to know the extent of improper acts committed in government to facilitate crimes and other wrongful acts. Inappropriate behaviours were at best, tolerated by public officials or, at worst, committed by them.

We learned that senior managers of the RCMP in British Columbia protected and assisted BC Liberals when the politicians decided that money laundering and other criminal acts in gambling establishments should be ignored. In doing so, commissioned officers broke this Oath of Office:

I swear that I will faithfully, diligently and impartially execute and perform the duties required of me as a member of the Royal Canadian Mounted Police, and will well and truly obey and perform all lawful orders and instructions that I receive as such, without fear, favour or affection of or toward any person.

The following item, a reader’s response, was published here three years ago. It is even more relevant today: 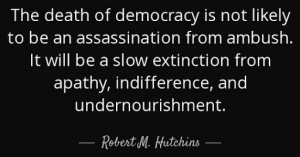 It’s time to put the fear of consequence back in governance. Since it is obvious that the current checks and balances mean little or nothing, to political organizations, bent on malfeasance while in power.

A more structured form of political or legal retribution is now required.

Corruption comes in many forms, many of which have surfaced in this country and province, within the past 15 years.

This message has become very clear with the results of the Quebec Corruption Commission, the Senate scandal, the Robo Call Elections fiasco, BC Rail, the Healthcare Firing/ Big Pharma scandal and now the above judges ruling into the Social Services Ministry.

The whole concept of democracy and responsible, ethical governance in this country, is under serious threat.

The solution, will be a long painful, expensive exploration, into the values and ethics of political partisanship, malfeasance and manipulation of our democratic system.

That would be just a start…