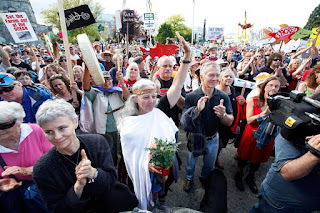 Alexandra Morton reports on testimony at the Cohen Inquiry that suggests a concerted effort by Fisheries and Oceans Canada to ignore and undermine science, even their own, if it points to fish farming as a source of viral disease in wild salmon. Under cross-examination, lawyers discomfit Dr. Laura Richards, DFO’s Director General of Science for the Pacific Region.

DFO – in the business of truth? by Alexandra Morton

“Dr. Kristi Miller, has indeed found evidence suggesting a virus, potentially Salmon Leukemia, could be having a devastating impact on the Fraser sockeye. Dr. Miller studies genomic profiles. Basically she reads the pattern of genes that have been switched on and off, a sort of living Braile that records the experiences of individual living creatures.

“This is a new field of science, but Miller’s work is so good it has been published in the world’s leading scientific journal, SCIENCE. When Miller reads the genomic profile of the Fraser sockeye, it says “retrovirus.”

“When Miller published her paper DFO would not allow her to speak to the press. . .

“. . . she notes Salmon Leukemia (called Marine Anemia by fish farmers) began spreading through fish farms in the early 1990s, (which is when the sockeye decline began). She reports that Salmon Leukemia can spread vertically, through the eggs, and also fish to fish.

“. . . Since Miller believes this is Salmon Leukemia, a virus that has been epidemic in salmon farms, this information runs counter to DFO policy that salmon farms have no impact. Is this why we were never told? . . .”