Something is rotten in the state of…

According to a BC Government website, “When you produce and sell oil or natural gas resources in B.C. you need to pay royalties and taxes.”

Payments for rights to use renewable and nonrenewable natural resources are fairly equivalent to rents we pay routinely for homes, offices, work sites, cars, hotel rooms and even the interest when we borrow money from the bank. We pay for using someone else’s stuff.

However, Christy Clark’s Liberal Government turned the resource royalty and rights program upside down. In 2016, BC started paying gas producers to remove and sell BC gas. By ordinary accounting standards, natural gas cost the province more than $400 million in fiscal year 2016.

With the Liberal plan to provide massive amounts of electricity to gas producers at a fraction of the price BC Hydro pays to acquire power, the gas industry is at the centre of a looming financial disaster like no other before it in BC history. 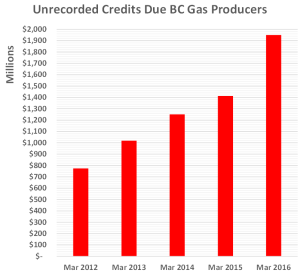 In FY 2016, natural gas royalties were  calculated to be $487 million but producers took advantage of royalty deduction credits and reduced the amounts paid to $139 million. However, the balance of credits owed producers grew by $538 million. That left the actual net royalty amount for the year at a deficit of $399 million.

The total of credits that producers can use to reduce future royalties has almost tripled to $2 billion during Christy Clark’s time as Premier. These numbers are never discussed by government officials and they are only disclosed within footnotes of audited financial statements issued annually. With 8 months now complete in FY 2017, the liability may already be close to $2.5 billion. We’ll probably not learn the actual number until next summer.

Following is a footnote to the province’s audited financial statements published in public accounts. A majority of the $1.13 billion shown as petroleum, natural gas and minerals revenue was actually received in the days before Clark. Billions in revenues were taken in, particularly in 2008-2010, but deferred, to be recognized over nine years following receipt.

So, while bonus bids on natural gas sales brought in only $16 million in FY 2016, the recognition of deferred revenue made it seem that more than $700 million came into treasury. Not surprising since the main accounting principle followed by Liberals is deception.

While the royalty accounts are in deficit, receipts from sale of gas and petroleum rights have almost disappeared. In three years (2008-2010) when Gordon Campbell was Premier, monthly rights sales brought in $142 million a month. In the last 20 months, the sales averaged $1.4 million. 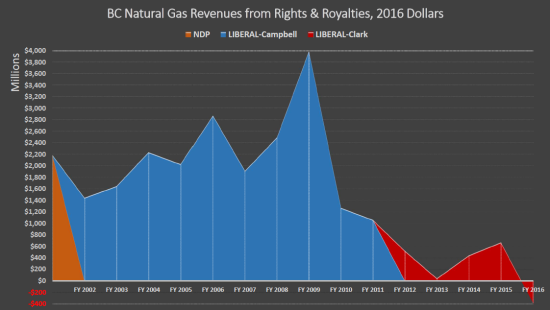 In October, the Globe and Mail reported:

Hefty U.S. duties could be slapped on Canadian timber exports to the United States by early 2017…

American lumber producers allege provinces – BC is the primary exporter – subsidize companies through below-market stumpage rates. At stake is the multi-billion dollar a year export trade for BC forest products.

The long lasting lumber dispute provides a warning that the southward flow of natural gas from BC is at risk because of heavy subsidies by the province. Gas producers have taken or accrued $4.6 billion in benefits during the last five years. Billions more are promised through subsidized electricity.

With American gas markets in surplus, the commodity price has been low and U.S. producers may be happy to block imports from Canada. Christy Clark and Rich Coleman have provided them with the tools.